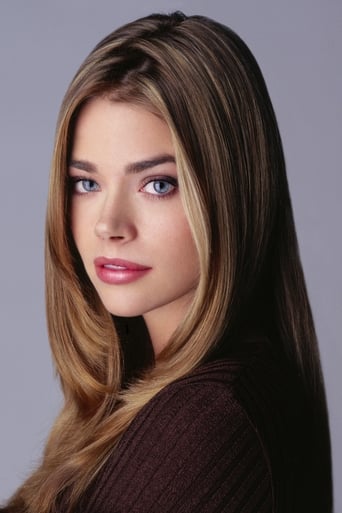 ​Denise Lee Richards (born February 17, 1971)   is an American actress and former fashion model. She achieved success during the late 1990s in several films that highlighted her sex appeal, including Starship Troopers, Wild Things, and The World Is Not Enough. She appears in the reality TV show, Denise Richards: It's Complicated which is broadcast on American channel E!. Richards was born in Downers Grove, Illinois, the daughter of Joni, a coffee shop owner, and Irv Richards, a telephone engineer. She has one sister, Michelle, and grew up in both Mokena and Downers Grove, Illinois. She graduated in 1989 from El Camino High School in Oceanside, California. As a child, she was the "only girl on the baseball team." Before she was an actress, Richards was signed by the Judith Fontaine Modeling & Talent Agency as a model. She spent the majority of the 1990s appearing in lower-budget films and TV shows such as Saved by the Bell, television movies, and guest starring in episodes of several television shows such as Married with Children (1991), a 5 second walk through. Her first starring role in a wide theatrical release was Starship Troopers in 1997, which was followed by her role in the moderately successful cult film Wild Things in 1998. In 1998, she appeared in the music video for the Blues Traveler song Canadian Rose. Richards was cast as the nuclear-physicist Christmas Jones in the 1999 James Bond film The World Is Not Enough (1999), which had a high box office gross. Though she considered her role "brainy", "athletic", and having depth of character, she was criticized as not credible in it. Her outfit, which often comprised a low-cut tank top and tight shorts, elicited comments. She was ranked as one of the worst Bond girls of all time by Entertainment Weekly in 2008, and was chosen as "Worst Supporting Actress" at the 1999 Razzie Awards for the role. In addition to her film work, Richards has made appearances in the situation comedies Spin City, Two and a Half Men, Friends and Seinfeld. She also starred in the short-lived UPN series Sex, Love & Secrets in 2005. Throughout the early 2000s, Richards appeared in several film roles which both parodied and utilized her image as a sex symbol, including Valentine, Undercover Brother and Scary Movie 3. In December 2004, she posed for a nude pictorial in Playboy magazine, five months after giving birth. Richards also posed semi-nude for the July 2006 issue of Jane magazine to raise money for the Clothes Off Our Back Foundation. In 1999, she ranked 9th in Maxim's 50 Sexiest Women and in 2001 she was voted 2nd in FHM's USA 100 Sexiest Women, 5th in FHM's 100 Sexiest Women and 19th in AskMen.com's 50 Most Beautiful Women. Richards appeared on the 8th season of Dancing with the Stars, paired with Maksim Chmerkovskiy. She was eliminated second on March 24, 2009. Richards sang "Take Me Out to the Ballgame" during the seventh-inning stretch at Wrigley Field on May 1, 2009.